The Meaning of the Word 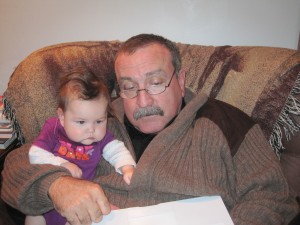 Learning some words with Grandpa

I am embarrassed to admit this. All my life, I’ve gotten the story of the prodigal son wrong.  And do you know why? Because I didn’t know the actual meaning of one little word. One adjective.

The Prodigal Son is famous in Christian history for pulling a stunt, as my pastor would say.  The young man thumbed his nose at family ties and sauntered away from home with his future inheritance stuffed in his messenger bag. After a season of wild living, in which he lost all that cash, the young man “came to his senses” and went back home, begging for a job feeding the pigs.

Preachers have pulled a zillion lessons from this one little story. Listening to these lessons, I’ve started thinking the word “prodigal” meant “wanderer.” Or something like that. I didn’t actually think this through. It is just the connotation that came to my mind.

But, I missed it. Here is what Mr. Webster says about prodigal:

Having or giving something on a lavish scale

Timothy Keller wrote a book about this subject called The Prodigal God. But that isn’t my point today. My point is this: It is important to know the real meaning of words. Knowing can change everything, including your theology. I’m thinking of this because a man I highly admire went to Heaven today. And he will be deeply missed down here. Years ago I had a chance to transcribe some letters for him. Among them was one to his nephew in grammar school.

Dow used big words in the letter. Some I didn’t even understand. I was feeling sad that he was so obviously disconnected from the young lad. Then the next sentence popped up. “I know you don’t understand some of these words,” he wrote. “But I’m including them on purpose. Go get your dictionary and look them up. It will be good for you to learn.”

It is good to learn. And, it is never to late. I think I’ll buy another dictionary in memory of Dow.