Happily Ever After So Far 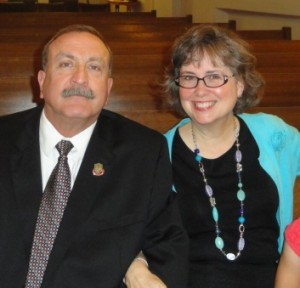 I married this man when I was eighteen years old, which seems rather insane in this era. But we married at then end of the Viet Nam war, at a time when many people had watched their future march off in a uniform and never come home again. We were all about grabbing the moment when we found it.

Plus, getting married and having babies had always been my ambition. When a high school counselor tried to convince me how exciting college life could be or how many glamorous jobs were waiting for a girl like me, I just shook my head. If I had to go to college, it would be to kill time until I found a rich doctor to marry.

Yes, dear reader, that was my Life Plan. Go to college for one semester and find a rich doctor to marry. Then have ten children and live in a gracious, two-story home.

I never made it to college. The rest of the plan slid a little off track, too. I married the doctor long before he started medical school. And my ideas collided with his great Life Plan, which was to be a country doctor and never give a hoot about making money.

Our ten children got whittled down to four (although we borrowed a fifth in the form of a favorite nephew), and the gracious two-story home was an old farmhouse we remodeled for about fifteen years.

During all those hard years of child-rearing, budget-stretching, and practice-building we promised ourselves that we would enjoy the golden years of empty-nesting together someday. And, we do. The starry-eyed teenager with her great Life Plan could never have dreamed up something this good. She could never have imagined being this rich in all the things that really matter.

And what is my point in all this?