A Reminder of Who is In Charge

A town I love was hit by a flood this week. No one was hurt, thank God, but the experience was awful anyway. I’m not even personally impacted, but it left me feeling shaky. It happened so fast. And it was so strong. And so unstoppable.

So, for the sake of those people I love who will be digging through mud for days, I’m reposting one of my Comfort Posts. Maybe it will help you, too, in whatever flood you are facing: 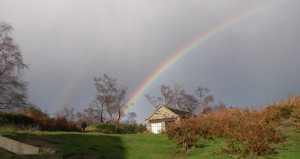 God is our refuge and strength, an ever-present help in trouble.
Therefore we will not fear, though the earth give way and the mountains fall into the heart of the sea,
though its waters roar and foam and the mountains quake with their surging.
Selah Psalm 46:1-3

I love this psalm. But I got totally distracted one day when I was reading along and suddenly remembered the heading of the passage. A psalm of the Sons of Korah. The sons of Korah? Wait a second. He is the guy who rebelled against Moses (and therefore God) in the wilderness. The earth opened up and swallowed him along with all his followers and all their families according to the account in the Old Testament. So, how could sons of Korah write a bunch of psalms several generations later?

And that question led me to one of the great Mercy Moments in the Bible. In the Book of Numbers, the writer describes the day the earth opened up and swallowed the rebellious men and their families including Korah and 250 of his followers. Then, almost as an afterthought, the writer tells us, “However, the sons of Korah did not die that day.” Numbers 16:10-11

The Bible doesn’t tell us how or why. But I have a theory. Maybe, in His mercy, God left a remnant alive so they could tell the story to their children and to their children’s children. So, one day thousands of years later, when I face a hard time, the sons of Korah can remind me, “No, seriously. We have seen the the earth give way and the mountains fall into the heart of the sea. But even that was not The End. God was still our refuge and our very present help in times of trouble.”