The Reluctant Courtship of Madge DuPree 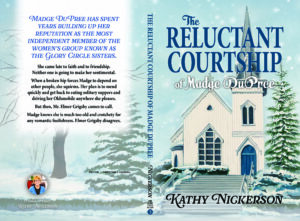 I am about to launch another book into the world, and I promise you it is like sending your child off to his first day of school. This book was especially fun, because I never expected to write it. I thought The Glory Circle Sisters had told their final story a book ago. But then, one morning, I awoke at 4:00am and felt like someone had tapped on my shoulder. In that bleary time between dreaming and waking, I saw Elmer Grigsby standing in a hallway. Not our hallway, thank goodness. He wore his best black dress coat and his nice hat. He held a bouquet of purple flowers.

That’s all. For several days, I awoke with thoughts of Elmer. Finally, I asked him if he had something to say. He did.

So, I stared writing it down. I had never seen Elmer as a romantic. When he first appeared in Thirty Days to Glory, he was a hopeless alcoholic living like a hermit. Granted, he had made a big change during that story. But still. Flowers?

The story unfolded as I wrote twenty-minutes every day before I went to work. Madge DuPree frowned and huffed and said she was much too old for any romantic nonsense. Elmer disagreed.

The story of their reluctant courtship has been fun to write. It gave me great hope for the happily-ever-afters of life. And I think we need those right now. Watch for more details about a virtual launch party in early November. The pandemic will keep us from throwing a party in person, but it can’t stop the celebration!

Here’s to love – in every season of life.