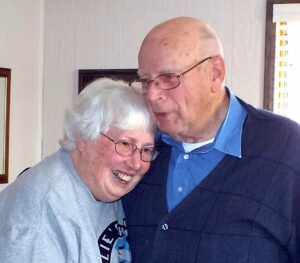 Grandpa Jim sat at the lunch table with us at the local café one afternoon. He had lost his sweet wife not long before, and the sadness still showed in his smile. But, that day, he told us he was thinking of paying a call on a widow in our community. His eyes brightened when he said it. My husband and I were a little surprised. We have long told one another that we would never remarry. It has been hard enough for the two-to-become-one in a marriage where we grew up together since we were teenagers. We could not imagine adapting to a new spouse in old age.

So, we asked Grandpa Jim, “Why on earth would you do such a thing?” (We weren’t subtle)

He got teary. “If you only knew,” he said, “what it would mean just to have someone sitting beside you in the car when you go for a drive.”

He was right. We didn’t know. We couldn’t even imagine the loneliness that comes after a sweet marriage of more than fifty years. And so Grandpa Jim and Grandma Harriet took the risk. Not many weeks after that conversation, they eloped. The ceremony took place at the home of their son, who was also their pastor. But none of the rest of us knew it was happening. We saw them at the café that afternoon. They were eating lunch and laughing with friends. We might have missed the occasion if Harriet hadn’t waved at just the right angle to make her ring sparkle in our direction.

Before Jim went to Heaven, he and Harriet spent several years sitting side by side, going for long drives, and always reaching out to the young people at church who needed a word of encouragement. I’m still not sure I would be brave enough to remarry, if it ever came to that. But I do admire the faith of these two. In the acknowledgements of my novel, The Courtship of Madge DuPree, I thanked them for showing us that love can blossom in any season.

Like my fictional friends Elmer and Madge, the Palmers were brave enough and humble enough give love another chance. I think they took the ultimate Lovers’ Leap. And, it worked. 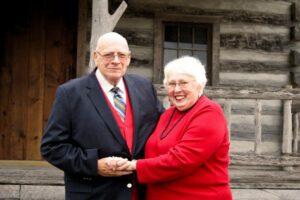