What to Do When the World Shakes 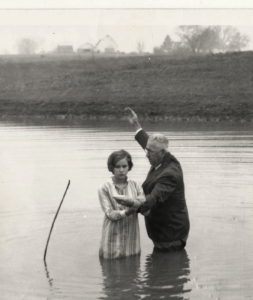 It was 1968, and the world was going crazy. I don’t use that word lightly. Martin Luther King, Jr. and Bobby Kennedy were both assassinated. The Viet Nam war heated up right along with protests against it. Riots, marches, and mayhem surrounded an entire generation who shouted that we couldn’t trust anyone over thirty.

And, in a small white church tucked away on a gravel road in mid-Missouri, an earthquake shook my pew at the close of a November service. I didn’t know it was an earthquake. I assumed the world shook just to get my attention.

That Sunday I wore my rainbow striped miniskirt into the cold water of my Uncle’s pond. My grandfather raised his hand to Heaven and then baptized me in the name of the Father, the Son, and the Holy Ghost. A small congregation stood on the banks, singing Amazing Grace and waiting to wrap me in a warm quilt. And their love.

The world has raged many times since 1968. It is raging now. But nothing has ever been louder than the sound of that hymn in my memory. I still feel the quilt. I still trust the Love. And I still know where to look when the floor begins to shake.