I’m Waiting with the Angels 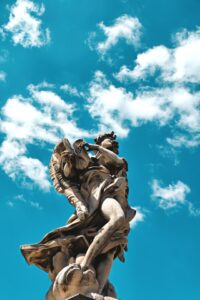 Photo by Michele Bitetto on Unsplash

For lent, I’m reading First Timothy 3:16 and focusing on a different phrase every week. It’s one of the ways I’m preparing my heart for another pandemic Easter. This week, the phrase about Jesus is this:

“He was seen by angels.”

It seems like a small phrase. Only five little words. At first, it feels like the gentle breeze of spring. I think about some of the obvious times when Jesus was seen by angels.

These are familiar, yet amazing, moments. Encounters worthy of more study and reflection.

But the scene most on my mind these days takes place during the hours Jesus hung on the cross. During His days of temptation, Jesus had told Satan, “Do you think I cannot appeal to my Father, and He will send me at once more than twelve legions of angels?”

Can you imagine those angels watching the crucifixion? I imagine them lined around the edges of Heaven dressed for battle, holding fiery swords. They strain against the veil that holds them back like war horses stamp and snort waiting for the battle. But, the order never comes. The earth shakes. The light hides. The thick curtain separating God and man rips top to bottom, and the son of David gives his final breath.

Yet, the angels are never released. They are never called to storm the earth and rescue the Creator from the creatures.

And, do you know why?

Because God had an even better ending for this story.

I’m holding onto that truth. I’d like to call down angels and put an end to some agonies in our world right now. But, instead, I wait. I strain forward with the angels and the humans to see what our good, good Father has planned for us.

I know it will be spectacular when it comes.