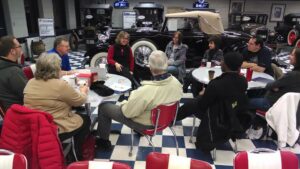 Tonight is the Christmas party for our local writers’ group, the Heartland Christian College Story Guild. And I’m missing it. So, of course, I’m feeling nostalgic and also so grateful for having found my tribe in these folks. I’m thinking back to the first-ever Christmas party of the HCC Writers Guild and remembering these words I wrote about our crew:

The idea for a Christmas party came to me in late November.

Like everything else about this writers’ group, it happened more by chance than by plan. And it was perfect. A few months before, I had begun to look around for people who liked to talk about words and writing and maybe getting published someday. Since my husband and I live forty-five miles from the nearest Starbucks, I knew this would be a challenge.

Maybe, if we lived in a city, I could find other writers who spoke the language of queries, proposals, partials, or fulls. But that kind of talk sounded slightly suspicious to most folks in my neighborhood.

One day, I threw out the concept to our local college dean.

I asked her if she thought there were people in our farming community who would be interested in the craft of writing. Then, I waited for her to laugh, especially since she’s my sister.

“We should find out,” she said. “Let’s offer a weekend workshop on Writing-for-Publication. You could teach it.” I had a novel under contract at the time and a few magazine articles in the archives. I wrote weekly columns for two small, county newspapers and submitted various projects here and there.

“Sure,” I said with all the confidence of someone who doesn’t know any better. “That sounds fun.”

So, the College hosted an Evening with a Local Author.

They kindly allowed me to ramble on about the wonders of the writing life. People actually came, and that launched the Heartland Christian College Writers Guild. Such a lofty name for the motley crew that started meeting every first Monday around tables at the local café.

By December, we had not yet taken the publishing world by storm.

But we had begun to stir up a few small flurries with our synergistic conversations. And now, we were throwing a party to celebrate our accomplishments, which were tiny, and our love of Christmas, which was huge.

“Bring whatever you have on hand,” we wrote on the invitation. “We will add it to the table and snack on the collective spread.” And so we did. I brought chocolate, which I consider more of a staple than flour or milk. Anna brought Parson’s Punch, because who doesn’t have all the ingredients for a delicious Christmas brew lying around their kitchen at the last moment?

Carol, our organic farmer with the flaming mane of hair, came in with apologies. “This is all I had,” she said holding out jars of homemade pickles and green tomato chutney. They ended up being the perfect compliment to all the sweets on the table, and our feast became a true reflection of our eclectic writing group.

Once we were fortified with punch and chutney, we settled in to face one another with our words.

This is always the hard part. Every time. Being brave enough to read or to hand off the page to our neighbor. No matter how many times we remind one another that these words on the page are not our flesh and blood, we know differently. We were there when the vein opened.

With Christmas lights twinkling and the fake fireplace glowing, we began. Anna, who claims to be more of an editor and encourager than a writer, brought a visual poem where the snow swooshed across the paper and took us along for a sleigh ride. Our dyslexic school librarian brought a short story so delightful that one of the college students eventually helped her print copies as scrolls. They wrapped the scrolls in ribbon and handed them out to guests at the Figgy Pudding party later in the month.

When it came around to our favorite poet, Jerry, he grinned and said, “I forgot to do the assignment, but I think I can remember a poem from my past.” This was not unusual. Jerry routinely forgot not only the assignment but also the date of our meetings or the time we were supposed to gather. Age and illness were against him these days, but he kept writing and smiling. Even when he showed up late.

So, Jerry sat in my living room and held his sweet wife’s hand while he recited a poem. He had written this one as he stood the night watch on distant shores as a young Marine. The poem was called, “Love,” and it made us all sigh and applaud.

I brought a retelling of Clement Moore’s Night Before Christmas dedicated to my ever-patient husband. The poor man has to remind me on a daily, sometimes hourly, basis that I am a “real writer.” Even though my novels are published by a smaller than small press, and my freelance career is mostly free. He is my constant, always reminding me how confident he is in my ability to write, how willing he is to support my passion, how much he hopes I’ll get rich and allow him to retire someday. He has such a great imagination.

He was also glad to host The Guild for our first annual party here in our small home between two cornfields. I think he was relieved that I had found my tribe. As much as he loves me, he does not really understand the challenge of living every day with a cast of imaginary characters in one’s head. He has not had to learn to live in two worlds and constantly pull himself back from the fictional one in time to show up at the day job and clock in. He does not check word counts on his coffee break or scribble notes for scenes on the margins of his notepad during staff meetings. But my tribe understands those things.

I am glad we had that particular party.

We joked that night about renaming ourselves the Heartland Literary and Green Tomato Chutney Society in a nod to one of the best-selling novels of that year. We marveled over and over at the creativity stored inside one another. It was one of our finest hours as a group.

In the year that followed, we made great progress. Josh discovered flash fiction. He not only sold several stories, but he joined a publication team as an acquisitions editor. Now we can get rejection letters from someone we know and love!

Three people ventured out to their first conferences, met real-life editors and agents, and lived to tell us about it. Some of those encounters even resulted in the beautiful “send me your stuff” conversations.

And one of the greatest accomplishments is that we grew into a second generation. Middle school and elementary students started asking if they could come sit in on Guild meetings. When I offered to start a junior Guild that would meet after school, they kind of wilted. They wanted the real stuff. The adult talks around the table about words, and writing, and books, and imagination. They may not understand everything we say, but the stories they write blow us away, and we can’t wait to see what kind of writers they become.

Later in the new year, we faced our greatest challenge as a Guild.

Jerry the Poet’s big heart gave out. I am sad because I will miss him, and because I was so sure this would be the year we would finally help him get published. But my husband reminds me that Jerry cares not a whit for such things just now. We have no idea how they publish poems in Heaven, but we are certain Jerry is reciting “Love” with an eloquence that can’t be touched on earth.

Instead of getting flowers for Jerry’s funeral, Carol wrote a poem on behalf of The Guild. I cried a bit when I read it. Then, I took a deep breath and prepared for the next meeting. We will gather around tables and return to writing. Because that is what we do. We will remind one another about one of the most important lessons we’ve learned out here in the middle of nowhere.

“Bring whatever you have to the table tonight. And, together, we will make it delicious.”