It’s Okay to Be Vanilla Bean 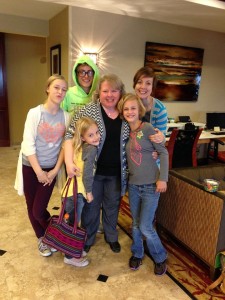 My friend, Anna, who is pictured here being swarmed by some of my grandchildren, often reminds me a writer needs new experiences to stay inspired. So last weekend we loaded up for a road trip to Omaha, Nebraska, to attend a writers conference together. (And to see some grandchildren.)

Among our new experiences was a walking tour of the lovely Dundee section of the city. Rather trendy for a couple of girls from the cornfield. We stopped in at eCreamery which is famous for appearing on Shark Tank one season. (and for flavors you can name and ship all over the country.) I was more impressed by the fact that it was the site of a young man’s famous selfie with Paul McCartney and Warren Buffet last summer. Even though it was dark outside, I insisted we pose in front of the bench where the famous Beatle once sat.

And, of course, we ate ice cream. 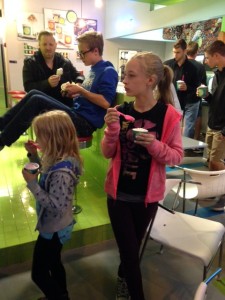 Anna ordered a scoop of mango coconut, and the girls got something pink and exotic. I struggled with all the choices and finally landed on Vanilla Bean. Which seemed appropriate for the grandmother in the crowd. But I was a little disappointed in myself. I had come on this trip for an adventure, new experiences, inspiration. I should have gotten something I’d never tasted before so that I could write about it my next novel!

Later that night, I Googled Paul McCartney, Omaha, and Ice Cream to read about that incident. When the article popped up, I saw the two famous gentlemen relaxing on the bench, and the eager youngster giving a thumbs up in front of his camera. Among the small details in  the article was this one: The flavor of ice cream Paul McCartney had just eaten at eCreamery. Yes, Dear Reader, Vanilla Bean. Sir Paul and I have shared the same experiences in Omaha, Nebraska.

I am definitely feeling inspired.