Why Kermit Made Me Cry 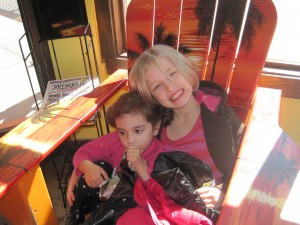 A couple of our muppets

Confession: The Muppet Movie made me cry. That’s right, the goofy movie starring a green puppet slightly upgraded from a tube sock with googly eyes. If you haven’t seen it, I’ll try to give you spoiler alerts before I reveal the plot twists. (She says with sarcasm)

I’ve tried to figure out why this silly, little ditty of a movie punched me in the gut a number of times. And I think I’ve come to two conclusions:

1. Spoiler Alert: The Muppets were trying to recreate the glory of their t.v. show from the eighties. You remember The Eighties. It was that colorful decade made up of parachute pants, Rainbow Bright, and Bill Cosby as Father-of-the-Year. Everything was big in the eighties. Over-sized sweaters, clunky jewelry, and stacks of curly hair. Even our bangs seemed to be standing on tip-toe in the eighties to shout, “Life is sooooooo exciting!”

The late eighties were also those years when we hit the sweet spot as parents. Our children were all (mostly) beyond awkward adolescence and were actually becoming fun teenagers. (Yes, fun). For some reason, they liked us. And we certainly liked them. We were the Cosby Show without the elegant brownstone and the high-paying jobs. If I ever start feeling nostalgic (which I only do in early spring, mid-summer, late fall, and all national holidays) I think about those days. So, of course Kermit made me cry when he said (and I paraphrase), “Come on, Kids, let’s put on a show!”

2. Spoiler Alert: Much of the movie focused on “finding our lost friends.” Fozzy was trying to do comedy in a seedy joint with a motley band. Miss Piggy was living large but lonely in Paris. Animal was in rehab. And on it went.

That, too, was familiar. We hit some bumps about ten years ago, and lots of our friends scattered for one reason or another. And while none of them are doing lousy comedy acts in shabby theaters, some have taken a road I can’t travel. Many others are thriving. They are loving God, loving people, and making the world a better place. But, we aren’t sitting together on Sunday mornings anymore. And, I miss them.

So, I cried. Over a croaky green frog, a snout-nosed diva, and the menagerie of friends who came together for The Cause.

But I smiled when the movie ended. (Because the guy got the girl, of course. Oops, forgot to warn you.) And because despite all the challenges and changes, life really does get better every year.