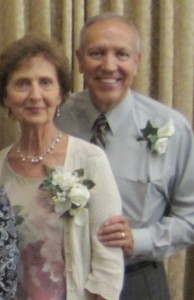 We attended a wonderful family reunion this weekend where my husband’s big brother and his wife celebrated their 50th wedding anniversary. We are all much too young for such a milestone, of course. But, there it was. As part of the ceremony, Rees and Frankie renewed their wedding vows in the same church where they were married, surrounded by every member of the original bridal party.

The theme of our weekend was Great is His Faithfulness, and it was so true. Rees and Frankie are both cancer survivors. They have endured great trials like the early loss of Frankie’s parents and the sudden death of a young son-in-law. Some of their children and grandchildren were gravely injured during a terrorist bombing on the mission field. But nobody focused on the hard stuff.

Instead we talked about the blessings. The miracles. The memories. The souls saved, marriages made, children born, and songs sung.

And, I think one of the secrets to this attitude is the vows. Rees and Frankie didn’t renew their vows for the first time on their wedding anniversary. They have done it in their hearts every day for fifty years. They have kept their vows to one another, to God, and to the family and friends who count on them to set an example.

In sickness and in health, in wealth and in want, for better or worse, as long as they both shall live.

God’s power and mercy have carried them. His goodness and grace have surrounded them. His faithfulness has filled them.