Sometimes, we show up for the day job and assume the casual conversations or routine chores are having no impact in the world. We wonder if anything we do or say will ever truly matter. Read on. 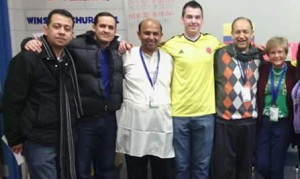 When John Molina and his friend, Rene, came to visit the United States  in the 1990’s, they wanted to learn English. They had come on tourist visas, so they couldn’t officially study anywhere. Somehow, they ended up sitting in my high school literature class in our small, church school.

We were probably reading Great Expectations that semester. Or possibly Tale of Two Cities. I’m pretty sure it was some variety of Dickens. Not a great way to learn how to speak the English language.

I remember the first sentence John managed to put together in a conversation with me. I don’t remember how many of the words he actually spoke, but the meaning became clear. He was trying to tell me he was homesick, lonely, and frustrated because, “I cannot express my heart.”

Evidently, I asked John why he wanted to learn this language with all its tricks and twists. “Because someday,” he said, “I want to preach in English.”

Eventually John returned to Colombia. We heard from him through other people occasionally and knew he had married, started a family, and returned to the states to pastor a Spanish-speaking church. We were proud of him from a distance.

My husband and I moved, too. Away from the town where we had met John and into a slightly different circle of church friends from the ones who had connected us in the first place.

More than twenty years passed, and then suddenly John showed up at a missions conference at our new church. We were astonished but thrilled to reconnect. Even then, I failed to recall the reason John had struggled through my literature class.

I forgot until John reminded me. This week. Right after he preached his first sermon in English.

And I was there.

He expressed his heart perfectly this time.