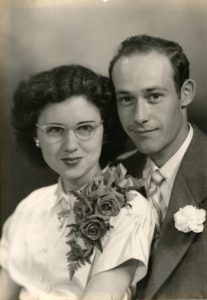 Happy 65th wedding anniversary this week to my wonderful parents. Life has changed a bit for them in the past few years. The circle of their activity has become smaller, but the sphere of their influence has grown larger as their children, grandchildren, and great-grandchildren spread out across the country.

We stopped in to see them a few days ago. My mother had gone out to get the biscuits & gravy my dad sometimes likes for breakfast. (Right after she checked Facebook to see what the grandchildren were doing.) I congratulated my dad on the upcoming anniversary. He doesn’t hear so well anymore, and conversations are limited. “Sixty-five years,” I said. “That’s a long time.”

A lot of nights. Sixty-five years of choosing, every night, to stay faithful to the woman he married for as long as they both shall live. That choosing explains a lot about the contentment in their little apartment. As the circle has grown smaller, the Center has remained the same.

And, it reminded me of the beautiful song our daughter, Charity, and her husband, Ryan, wrote during a recent song-writing challenge called the 5in5. I’m posting it here in honor of my parents and their sixty-five years. And I’m posting it as a reminder to those of us who are coming behind them. Let’s keep choosing.