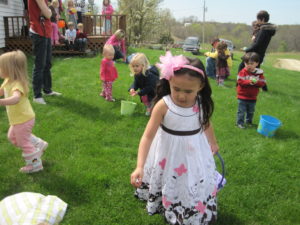 From our side of history, the Easter story is so clear.  But, If I’d been there, I probably would have doubted, too. (The following conversations are my paraphrase of scriptures quoted in the book of Mark.)

“When we get to Jerusalem,” Jesus told his friends, “I will be delivered to the religious leaders. They will condemn me and hand me over to the Romans. They will mock me, spit on me, beat me, and kill me. But three days later I will come back to life.”

A few days later, Jesus and his friends ate the Passover meal together in the city. Jesus reminded them of his destiny and told them, “My time is up. You guys are going to scatter like scared sheep. You, Peter, are going to deny me three times. But, after I come back to life, I’ll meet up with you in Galilee.”

Things unfolded exactly as Jesus had predicted. Peter and John saw the mocking, the spitting, the beating, and the death. Peter denied him. Evidently, they forgot the part about coming back to life.

While they were hiding and mourning, Mary Magdalene came running with the report that Jesus was alive! She had seen him in the garden, and he had said, “Go and tell my disciples, including Peter, that I am going ahead of you to Galilee. I will see you there, just as I said.”

Such good news. For all of us.

If you want to hear the story told in music, here is my favorite clip. Ignore the lack of HD and feel the power. He’s Alive!