A Little Christmas Fiction for You 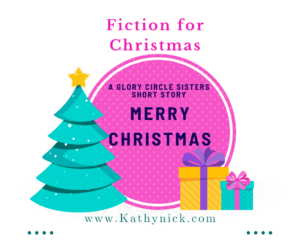 As an author, I try to create characters so real you will want to add them to your Christmas card list. That happened to me every time I wrote about The Glory Circle Sisters of Mt. Zion Church. Catherine, Madge, Emily, Bess, Erma, and all the rest became real people to me. Even Elmer Grigsby. Or maybe, especially Elmer. So, as a little Christmas gift to you, here is a short, short story about the ladies shopping for a Christmas tree. (A version was originally published by Spark Magazine and reprinted here when rights reverted to me.)

Erma leaned closer to the Christmas tree she had been examining on the corner lot. She thought it looked nice.

“Too spindly.” Grace Colby said. She shoved her cane into the branches, and Erma jumped to avoid getting whacked. But Grace wasn’t done with her critique. “This scraggly tree looks like the one the Methodists donated last year. I vow you could see all the way through the branches to the back of the soup kitchen. It isn’t something the Glory Circle Sisters of Mt. Zion church should present.”

Madge spun around and whacked poor Erma in the head with her giant handbag. “Grace Colby, if that tree was skimpy, it wasn’t from the Methodists. You know my friend, Emily, is a Methodist, and that woman is generous.”

“She is.” Grace stepped back from the offending tree. “Maybe it was the Episcopalians.”

Erma rubbed her head and dared to breathe, but not deeply. She had said they needed Pastor Cleveland to come along. He could settle any arguments and decide on the best tree. Of course, they had Evelyn Johnson, and she was the next best thing if you were looking for someone to be the boss.

As if Evelyn had read her mind, the presiding secretary reached out and ran her hand down the feathery branches of the tree. Her diamond bracelet sparkled against the greenery. “All trees look a little sparse in the daylight,” she said. “You have to see it at night to get the full effect.”

“Well, I’m not staying till sunset,” Madge said. “So, we better pick one. Erma, what’s the budget?”

Erma straightened the glasses Madge had knocked crooked and then peeked into a crumpled envelope. “We have $96.73 left from Thanksgiving baskets.”

“Great, let’s get shopping.” Madge whirled a second time, smacked the tree, and sent it wobbling toward Grace. Evelyn caught the tree, Erma caught Grace, and Madge marched forward. She never saw the cane that almost poked her in the back.

When the ladies had recovered and taken a few steps down the walk, Evelyn spoke again. “How are we getting the tree to the mission?”

“Madge brought her car.” Erma slapped her hand over her mouth. She had spoken before she remembered that part was supposed to be a secret.

“Well, that’s insane,” Grace brought the whole parade to a stop. “Have we forgotten Madge’s little incident with the ice cream truck last summer? I think it’s time we face facts, ladies. We have no business gallivanting around, let alone shopping for a Christmas tree.”

“You know it’s true,” Grace said. “This cold is terrible for Erma’s arthritis. Madge shouldn’t be allowed on the highway with a pushcart. And Evelyn’s new boots are getting ruined in this slush.”

Evelyn glanced down just as Madge shoved into the middle of the group.

“Grace is right. We’ve come out here thinking we could do something for the less fortunate. But we are probably more of a danger to society than a help. If one of us slips on the ice, we’ll become a train wreck of broken hips. We can’t even carry a tree around the corner, let alone shove it on top of my Oldsmobile. Maybe we should go home to knit scarves and watch Wheel-of-Fortune. Somebody else can buy a tree.”

Erma knew Madge was goading them, but in the sudden silence, she heard something else. The familiar ringing of a bell beside a red kettle. The sound echoed above the noise of street traffic, and all four ladies turned to find the source. A girl so small she used two hands to raise the bell. Erma noticed one glove had holes in every finger.

The Glory Circle sisters stood in the cold for several seconds while the bell rang. Then, Erma, who normally kept her opinion as close as her pennies, stepped forward with her crumpled envelope. She dropped ninety-six dollars and seventy-three cents into the kettle. Then she turned to the ladies with raised eyebrows. By the time they had emptied pockets and purses, no one had a penny left.

Finally, Evelyn, who never carried cash, unclasped her diamond bracelet and dropped it into the kettle, too. She reached out and stopped the girl’s bell. “You can go home now,” she said. “You’ve done more than enough for today.” The little girl hooked her kettle over one arm, flashed a grin, and trotted off in the direction of whatever adult should have been supervising her.

If they ever talked about the episode in the future, which they wouldn’t, no one could have said exactly what came over them.

In the few moments they stood listening to the bell, they forgot the arguments. Each one had relived a thousand moments of hard times, good times, family gatherings, and lonely meals. No one would be able to explain what moved them, except to say, “It was Christmas.”

They stood in the cold for a few more seconds before Erma spoke. “Well,” she said, “we’re broke now. What are we going to do about a tree for the mission?”

“No problem,” Madge said. “I’ve got a Methodist friend named Emily. She probably has an extra tree.”

(If you want to read more about these friends, you can check out all my books here.)